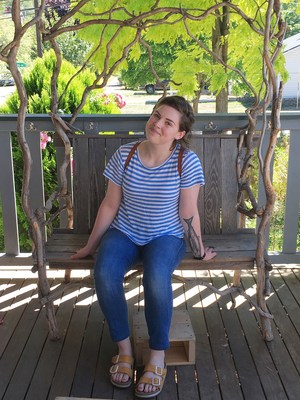 by Lora Kolmer,  Director of Admissions and Community Relations

Quiet, shy, introverted: these are not words you would associate with Valley alumna Sally Roberts. In the middle of the summer, Sally stopped by Valley to visit her former school and see all the changes that had taken place in the ten years since she had graduated.
Sally and I were already acquainted with each other. She was an advisee of mine during my time working at University Prep, one of nine tight knit students who formed an advisory that, by the time they graduated in 2013, were more than ready to conquer college and beyond. I greeted Sally in the entry of what is now the Valley Administration building.

“Wow, I can’t believe I’m standing in what used to be my third grade classroom!” Sally, now a senior at Vassar and studying theater, was amazed at the changes. “I have so many wonderful memories here. Valley is where my love of theater started. I made my stage debut as the head Truffula Tree in Dr. Seuss’s The Lorax.”

Not a bad start for the girl who had a leading role in Rent and several other play productions while at UPrep.

While theater is at the heart of Sally’s passions, her greatest accomplishment to date isn’t in theater. It is for a cause near and dear to her heart ­– the work she did to help pass Washington State’s Referendum 74, the bill that would legalize same-sex marriage. “I worked the phone bank and I was really good at it. I could be very persuasive, so they eventually made me a phone bank trainer!” The successful election made for a positive experience, but it didn’t come without challenges. Juggling school, theater, and her outside passions made for a very busy schedule that left her physically, mentally, and emotionally drained. But just like her early experiences at Valley, these challenges allowed her to learn and grow.

“Valley was such a small school that you could never just walk away from problems or avoid conflict. You had to address them because all the teachers knew when things were going on. There was one girl in my class I was always struggling with. We both had strong personalities. Our teachers worked with us and helped us learn to listen and work through our issues. I credit Valley for teaching me to not avoid problems and to listen and work towards resolving conflicts. Oh, and that girl (Valley alumna Betty Vogeley) is one of my best friends today!”

Sally wants prospective families and current families to know The Valley School community is so special because you don’t just get to know the students in your class, you get to know all the families, families of kids in your class as well as the other classes. Such a great community can really prepare students for the next stage in their lives.

When she graduates from Vassar next year, Sally hopes to move to NYC and make her way in the theater scene. Just like the Magic 8 ball we passed around in our advisory, I’d say, “The outlook is good!”
Published February 1, 2017 Print