DIVERSITY AND JUSTICE ON THE STAGE AND IN THE CLASSROOM 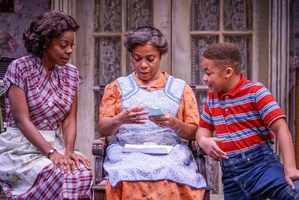 It isn’t easy growing up in our world today. Social media is distributing messages before families have time to process and discuss. And the messages being delivered are often talking over or at people instead of creating moments for thoughtful discussion. Which is why the recent field trip to the Seattle Rep by Valley 4th and 5th graders to watch their classmate Jalani Clemmons perform in A Raisin in the Sun was so timely. As Mary Louise commented upon returning from the play and having a dialogue in class, “We had a powerful discussion to reflect on our feelings about the play. Jalani asked the kids what made them uncomfortable, and it was so inspiring to hear all of the kids reflect so deeply.”

The learning didn’t just stop with their reflections about the play. The Rep provided Valley classes with training and an educational packet where the kids learned about the history of African American Theater and discussed the timeline of the Civil Rights Movement. Then the kids created poetry and posters to create a “Wall of Justice and Fairness” in the fourth grade classroom. It was a really gratifying way for Jalani to wrap up his performance with the Rep after having spent months balancing both school and the play.

Jalani isn’t new to theater work. He told his mom when he was very young that he wanted to be an actor, engineer, or soccer player. He did his first play when he was six, Grease Jr. with Broadway Bound. He moved on to star in other plays with Broadway Bound, and it was his performance in High School Musical that got him noticed by a scout at the Rep who recruited him for his latest role. He is definitely hoping that he’ll continue to keep getting noticed by professionals in the acting world who will consider him for roles in other plays and movies.

Because of all that is going on in society right now and the Black Lives Matter movement, Jalani believes this play was being performed at a really important time. It does still fill him with sadness, but it also gives him hope. He is really proud of his classmates and hope they truly remember the play, but he is especially proud of the fact he remembered all of his lines and was so happy to be involved in such an important play with a powerful message.

Finally, in an effort to share their powerful learning with our school community, the 4th grade class recited Langston Hughes powerful poem Harlem at a Friday All-School Sing. (The poem served as inspiration to Lorraine Hansberry to write her play, which she titled from the poem.) We hope it inspires you to have a discussion in your home. What are your dreams for your family, your school and your community?

What happens to a dream deferred?

Does it dry up

Or crust and sugar over–

Or does it explode?