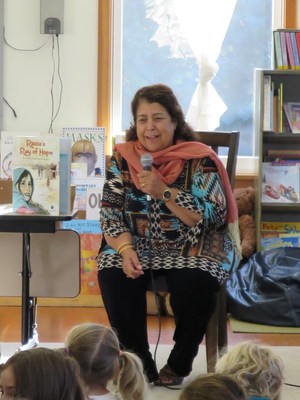 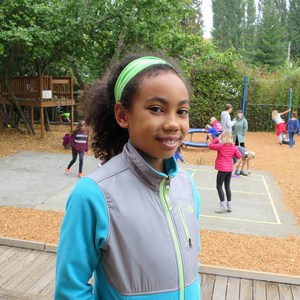 Moira is a Valley third grader who is happy to be a kid in America, but she understands that not all girls in the world have the chances and opportunities that she has. When she learned about Razia Jan and her Ray of Hope Foundation, she decided this was a way she could make a difference.

Moira learned about Razia from her friend Maxime who sponsored a girl in Afghanistan through the Ray of Hope Foundation, a nonprofit that empowers young women and girls in Afghanistan through community-based education. Once she decided this was a cause she believed in, it was time to get fundraising! She has sold paper lanterns, held a lemonade stand at Seward Park, and gathered donations (instead of presents) at birthday parties. Moira now sponsors an Afghan girl named Feroza. She wants to be a doctor when she grows up.

I sat down with Moira on the Valley playground and we talked about the cultural differences between our two countries. “For years, girls in Afghanistan were forced to wear scarves over their heads and they were not even allowed to wear bright colors,” commented Moira, “they were banned from schools. I want them to go to school to learn and have fun like I am able to do.”

We also talked about how not all things in the lives of Afghan girls are bad. For instance, “They play a game that is like a matching game with rocks. You dig four holes and bury the rocks and try to find the match. That sounds fun!” says Moira.

Right now Moira is hoping to one day be able to meet the girl she sponsors, but she wants to wait until Afghanistan is a safer place, without wars and bombs. She is really excited to have dinner with Razia Jan while she is visiting Seattle and talk about the work she is doing.

Razia Jan visited The Valley School on September 26 and spoke about her foundation and what it is like to start a school for girls in Afghanistan. I think we can all agree that Moira is making a difference both at home and abroad!

To read the Seattle Times story about Razia’s Ray of Hope Foundation, visit