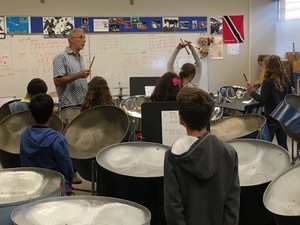 On a recent weekday afternoon this spring, strains of jazz pianist Fats Waller’s “Ain’t Misbehavin’” could be heard at the Martin Luther King Community Center, a short walk from the Valley School. This version wasn’t being played by a jazz ensemble, however, but by a group of fifteen Valley School fourth graders on steel pan drums, directed by their teacher and veteran steel pan bandleader, Michael Shantz.
Shantz has been playing steel drum music for over thirty years and has toured the world with his Bakra Bata Steel Band, performing at festivals in Haiti, Trinidad, Mexico and Brazil. Based in Seattle since 1984, Shantz is now the artistic director of The Seattle Women’s Steel Pan Project, which administrative director Oriana Estrada describes as a multi-generational, multi-ethnic steel drum band “dedicated to creating a space for women and girls in music through arts education.” Shantz has always seen education as central to his musical career. His children have played in Bakra Bata and have also been students at The Valley School. His 4th grade grandson will be graduating from Valley in 2018, and Shantz has now been teaching steel pan classes to fourth and fifth grade Valley School students for five years.

During the class I was lucky to observe, the fourth grade ensemble was working on the rhythm of “Ain’t Misbehavin,’” one of two songs they will play at the end of the year celebration and 5th grade graduation ceremony. “What makes the music make sense? It’s the time,” he tells the band. The composition is arranged for steel band with four voices so that the high and low parts are played by separate groups of students on drums with different timbres which all must work together—a picture of collaboration that Shantz says is integral to the experience of his classes and the instrument itself. When one girl asks him about how her part goes, he replies, “I could show you, but listen to those around you. Where do we go to get advice? From the people next to us that share our voice.” Built into the steel pan’s origins is the idea of inclusion. It is a non-European instrument that doesn’t have a history of conservatory-style teaching and recitals, but cooperative, group learning and street performance in the public spaces of the Caribbean and Africa. Shantz tries to embody these roots of the instrument through his teaching style. “Each time we learn a new song,” he remarks, “somebody will be faster than someone else in learning a particular section, but it’s often not the same person every time, so players take turns in being a leader and showing each other how the part goes.” This also charges his students with a sense of responsibility that keeps the practice session on track and fifteen kids with a set of loud metal drums in front of them under control. “Ain’t Misbehavin’” is a good tune to play with children, says Shantz, because, if nothing else, they can relate to the message signaled by the song’s title.

In a room decorated with pictures of the folk art of the Caribbean and the flags of St. Lucia and Trinidad and Tobago, Michael Shantz is exposing these Valley School students to cultures with roots far from the Seattle region. But more than that, he is introducing them to the practice of global citizenship by allowing them to add their own experience to the lively and accessible steel pan music tradition.
Published June 16, 2016