A Profile of Maintenance Mike, The Valley School’s Jack-of-All-Trades 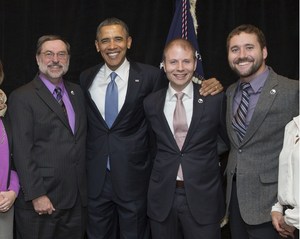 This is how Mike Miller (aka Maintenance Mike; aka Director of Facilities of the Valley School) describes the work he has done on the school’s behalf since October 2012 when he was hired, on a part-time basis, to help out with some light construction and maintenance.

After two weeks of working on this part-time ad hoc basis, Mike was offered a full-time job and he has been one of the very unique, and invaluable strengths of The Valley School ever since.

“I can do tech; I can do carpentry…..Initially, they just had me do a walk-around and make a list of everything I saw that needed work. At the time the school didn’t have a Director of Operations or Finance or a Director of Facilities. The former Head of School was doing a lot of repairs himself. When he saw someone who was capable with a detailed eye and a long list of stuff that I felt should get worked on, he employed me on the spot…. He also saw that I was good with kids; he saw that I fit the mold of the Valley School,” Mike grins.

The youngest of a close-knit family of six kids (from Wenatchee, WA), Mike comes from a family full of educators: his mother has had a life-long career as a reading teacher/specialist, one sister is a kindergarten teacher, another sister is a speech pathologist, his brother is a police officer/school resource officer, and his twin sister is a personal trainer. (Fun fact: there are two sets of twins in the Miller family.) Mike is also uncle to eight (incredibly lucky) nieces and nephews.

Mike acknowledges that, at first, his job felt overwhelming, but also very gratifying. “I just wanted to embody: ‘How can I help?’ That was my question.”

Valley School teachers soon began to recognize all that Mike could provide for them (in addition to the physical space of the school). He initially started to help out with recess, recognizing the positive aspects of having a male role model running around the playground.

He has since run a wood-working lesson for kindergarteners; he read The Wayside School series over the course of two school years to the now-5th graders during lunch time; he has subbed in the library for Marilyn; and he chaperoned the trip to Islandwood last year with Laura. He has also organized and run 15-20 birthday parties for Valley kids, summer camps with 4th grade teacher Mary Louise, as well as all the safety drills for the school.

Many of us may associate Mike with his most visible of projects:

Those are some things that Mike has done that you can see.

Here are some things you might not have seen:

Two months before Mike began working at Valley his father was diagnosed with Stage Four Melanoma and he passed away eleven months later in July, 2013, at age 66. Mike is so grateful to Valley for that year because he felt as if he was “being looked after” during a very difficult time for him and his family.

“I don’t know if everyone understands just how important this job was to me during that time….I could tell my dad was so happy with this place. To have my dad know that I (his youngest son) had landed somewhere good was a godsend,” Mike reflects.

In fact, his dad visited Valley frequently during that year while he was getting cancer treatment in Seattle. He helped Mike with irrigation and planting and in April, three months before his death, his dad and his mom helped Mike plant the window boxes that have become an annual spring tradition at Valley. (His mom has come back every year since to help out with these window boxes.)

Before he died, Mike’s father told him, in a prescient moment, that he regretted that he would not see the Seahawks go to the Super Bowl that season (he never predicted a win, he just forecasted what the Miller family later coined the “season of destiny”). He passed on his season tickets to his children. Six months after his death his sons spread some of his ashes on Century Link field after the Seahawks won the NFC Championship. And then those season tickets were drawn in a lottery that sent Mike and his brother to Super Bowl XLVIII and a Seahawks win.

In November, four months after his father’s passing, Mike had been asked to drive in the motorcade when President Obama came to Seattle. When he shook the President’s hand, he introduced himself as “Mike Miller, from The Valley School.”

“In a season of such sadness and grief, I feel my father gave me such magical moments – two things I never thought I would do in my life,” Mike says.

Indeed, his father leaves a powerful legacy in those window boxes and gardens and, most importantly, in The Valley School’s own Mike Miller. While he plans to stay at the Valley School for the foreseeable future, Mike says, “My number one goal here has always been to leave this place better than I found it.”

What new things does Mike look forward to with his work at Valley? “Being caught up on my long To-Do list and perhaps offering an after-school film-making club to use my cinema studies degree and filmmaking aspirations. Mostly I just want to make a positive difference here every day.”