It’s NOT Greek to Them! 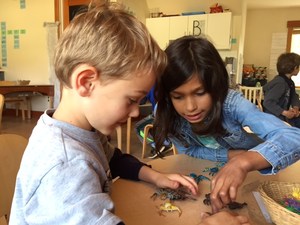 What do you get when you add an even number to another even number? How about an odd plus another odd number or an even number plus and odd number? This week our first graders traveled back in time to join Euclid's Secret Math Society and to test some of his mathematical theories.
Students used manipulatives to construct and solve math sentences which helped them test and prove his ideas. This work required them to practice making odd and even numbers, adding numbers and distinguishing between odd and even amounts. Later they transferred their new knowledge into a Little Book, in which they wrote math equations illustrating Euclid's ancient math discoveries. Try it at home and see what they learned.
Published May 23, 2016 Print