First Grade Wraps Up Their Unit on Snails 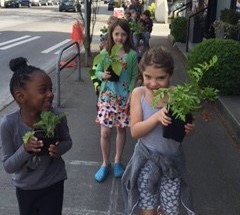 There was an abundance of learning during the first grade snail unit. After getting their own snail, children weighed and recorded their snail’s weight using a digital scale.
They tested food preferences with their snails, laying out two fruits or vegetables and recording which food the snail ate first. The class was visited by a snail expert, who spoke to the children about snail farming and harvesting. He was very impressed by student’s scientific knowledge of snails and took his time providing new snail facts, answering questions, and giving tips for plants to include in the planned snail garden.

After learning that snails can pull up to ten times their body weight, children put their snails to the test.  They hooked up chariots to their snails and added one-gram cubes, one at a time, to see how much weight their individual snail could pull. Children recorded the weight pulled using tally marks and added them up at the end. To culminate the unit, the class walked to City People’s to purchase plants for our new snail garden.  Children chose plants that would provide homes and food for the snails.  Upon returning to school, they prepared the soil and planted their plants.  First grade students shared their knowledge with other grades and explained the purpose and rules of our newly created snail garden.  Snails have become an integral part of the first grade classroom and the playground environment.
Published April 29, 2016 Print