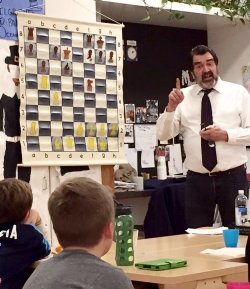 When you sit down to talk with Valley School Chess Club teacher (and international chess master) Bill Schill, you can be sure that you will be gifted with a story. It will be a superbly-crafted narrative, complete with suspense, villains, heroes, close-calls, lucky breaks, and often the story will turn on a specific move: mostly, a chess move.
The sixteen members of the Valley School Chess Club know this very well. Each Wednesday, as they eat their after-school snack, they sit in rapt attention while Bill recounts a famous tournament game from his own repertoire or from that of the great chess Grandmasters of the world and throughout history (e.g., Fischer, Kasparov, Karpov, Carlsen, etc.). He uses no notes. He tells a story through chess moves, each of which is emblazoned in his memory, and which he replays on his large hanging chessboard. He asks the kids to anticipate a next move or to decide what would be the better move. Hands fly up, voices rise, until he reminds them gently that they need to stay in their seats and he will call on them. Sometimes there are rewards for correct answers (a chess magazine, a rubber chess knight, a chessman cookie). Mostly, the challenge itself, and Bill’s visible delight at their “a-ha moments,” is ample reward.

Bill’s own story of chess began at age five when his father taught him to play. Bill did not win his first game against his father until six years later. “You can see that my father wasn’t giving anything away. So it was a big deal when I finally won. Rook to h8. That was the winning move.”

He continued to play chess in local and national tournaments through high school and college, achieving Masters rating (2200) at the US Open in Chicago. He stayed on an academic track, studying History and Political Science at the University of Washington, and getting accepted into law school. Not one to play a predictable game, Bill made a surprising move (apparently even to him) at this point when he entered and won first place in the Seattle Backgammon Championship in 1982. Three weeks later, he won first place in the Washington State Backgammon Championship, which bought him a ticket to Las Vegas
to play in the World Amateur Backgammon Championship where he placed fifth, and won $33,000.00 -- a substantial leap from his pizza delivery salary that was supporting him in college. He took a hiatus from school.

Six months later he played in the World Championship Professional section. Going into the finals, having defeated the world champion, he was favored to win first place. Unfortunately, his opponent in the Finals was a member of the mafia (who actively cheated in his matches and threatened people if they complained). “I’m from Seattle; I know nothing about this,” Bill said. So Bill, watching his opponent throw rigged dice, settled quietly for Second Place in the 1983 World Backgammon Championship (and another large reward).

Eventually, disgusted with the culture of unfair play he found not only in the backgammon but also, subsequently, in the competitive poker world, he, thankfully, returned to chess.

After winning First Place in the 2000 and 2001 Washington State Chess Championships, he started teaching chess to Seattle elementary school kids. He lights up when he talks about teaching: “I think what my job really is -- what I am trying to do, what I like doing -- is instilling a love for learning and curiosity and chess is just the vehicle for this. And so what I think is really important is when you have a first grader who comes up with a brilliant move, you have to have someone standing up there who knows it’s a brilliant move and says, ‘That’s the move Fischer made in that position. And that’s something!’”

While he teaches at a number of schools in the region, The Valley School is one of his favorites. “I am continually impressed by the educational culture at Valley. I think the children are creative. And they get the competitive thing just the way I like it to be absorbed. They compete and they are completely friendly. And they help each other with their moves. There’s no bullying. Ever. No crying. Ever. ‘Good game.’ Handshakes. Perfect. Also at Valley there’s absolutely no “fussing” about having to record their games. They grab a score sheet and go. They believe me: writing down your games will become totally natural and you’ll play better.”

The fascination with chess that Bill instills in his students (encouraging them to follow their chess heroes, look up games, read the moves, record their own moves, and review their games play by play) he thinks can inform what they will do later in any field: engage in research, apply this research to their creative process, and learn to think about their own thinking (i.e., to notice when they are moving too fast, not thinking carefully through the relationships among moves).

Last year, Bill had the opportunity to play the top-rated chess Grandmaster of all time, Magnus Carlsen. He returned and replayed the game for his Valley students. At some point in his story, the students started jumping out of their seats and cheering (and, indeed, there were a few tears of joy). They had just realized that the game was going to be a draw. Bill, clearly delighted by his students’ response, smiled and said, “After the game, Magnus Carlsen said to me, “Oh my goodness, I thought I was going to lose.”


He reflected privately later, “I played the highest rated player in history and tied. I was once almost the World Backgammon Champion. So I guess this doesn’t deviate from my story that much.”

Bill Schill is a FIDE (Fédération Internationale des Échecs) Master. He currently has his lifetime high rating with the USCF (United States Chess Federation): 2320. And he is the 2015 Pacific Coast Chess Champion. He has been The Valley School Chess Club coach for ten years.
Published March 30, 2016 Print