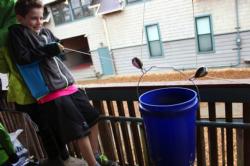 Every student and parent has that one special lesson from Valley, the one they will always remember. Maybe it’s the ritualistic Archimedes bath in first grade where kids literally get their feet wet studying ancient Greece. Or is it the snowy landscape of kindergarten, frozen in a study of the arctic? You’ll still find many of those treasured units in the classroom. We think there would be riots if we took them away! But our incredible faculty are also innovators, pedagogical tinkerers, and they work each year to approach a unit from a fresh angle or to shake things up and bring in topics the students have never encountered. Here’s what’s happening in several of our classrooms right now—from the classics you remember to cool new units that may yet become new traditions.
3rd Grade
Do you remember how to spell “medieval”? Yes, it’s still a vocab word and a treasured unit in third grade, where the Black Plague rampages and knights battle and a romantic time in European history comes to life.
This year, third grade teacher Carrie Abbot designed a new science unit focusing on the building blocks of machinery—the simple machines.
Kids studied wheels and axles by building their own mini carts then experimented pulling their carts up and down inclined planes (aka ramps!) and measured the force involved.
They compared the effectiveness of a one-pulley system versus a three-pulley system to move a heavy concrete block and used pulleys to move objects from the treehouse to the second-grade steps.
Through sewing using a round blunt needle and also using a sharp needle, students saw the difference a wedge makes.
It was super fun and a great introduction to simple physics at work. Kids learned to recognize the simple machines that surround us and proved that they really make work easier!
2nd Grade
All hail, Caesar! Second grade delved deep into ancient Rome, culminating in the classic Roman feast. The children studied Roman architecture, learned about the legend of Romulus and Remus, and even performed two other Roman legends at all-school sing. They were fantastic!
Second grade has traditionally studied the human body. Maybe you still have the life-sized cardboard cutout with bones, organs, veins, and arteries. This year, second grade teacher Brittany Sherlock is adding hands-on experiments with just enough gross-out appeal to really capture the kids’ attention. At the end of this year, they’ll watch germs taken from a part of their bodies grow in petri dishes and they’ll make fake but edible blood and snot. What hasn’t changed is a host of parents who work in the field of medicine and health willing to share their knowledge and make the unit come alive.
Pre-K
A staple of pre-K, the superhero unit taps into that which is powerful and magical inside us all. Pre-K teacher Jill Rufsvold finds it’s a theme with broad appeal that allows kids to bring their interests to the fore in a new way. This year, there was a fellow who adores spiders, so it’s no surprise that his superhero persona has arachnid qualities. Jill brings this unit back every year because it lets Valley’s smallest students play with power in a way that’s different from that celebrated through cartoon superheroes. It also inspires the class to get out into the world and meet everyday superheroes, and it pushes us to up the ante on good-deed doing!
Something new this year is getting a little free-range and getting out into the world more. The youngest Valley cohort is taking the bus to the fire station, the library, to the fabric store, to the park, and even up to St. Clouds restaurant where they met more everyday heroes. They had so much fun that they’re just now creating a transportation unit together. By exploring everything from flying to horseback riding, they should hit on a type of transportation that speaks to and excites each child!
Posted: 4/7/2015
Published April 7, 2015 Print