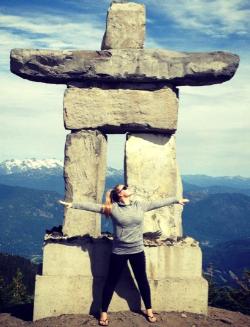 One of class of 1996 alum Petra Thompson’s fondest memories of The Valley School was of the quiet time she got to enjoy in aftercare with Roanna. Growing up in Madison Valley, Petra walked to and from school every day and because both of her parents worked she was lucky enough to spend extra time in what she describes as her “home away from home.” Her relationship with Valley endures today not just in the friendships she made but also in her current role as Valley School Board member.

We talked with Petra during a rare break in her busy schedule working for Fitmob, a fitness technology startup company that launched in Seattle five months ago. Prior to fitmob, Petra spent 9 years at lululemon athletica in leadership and organizational development. We were curious to learn about the path that Petra took from the Valley School to where she is now and to hear about her perspective on and vision for the Valley School today.
Profile: Valley School Alum and Current Board Member Petra Thompson
An invitation to Board membership in 2011 was not the first time that Petra was asked to play a role at the Valley School in her adult life. In recalling the many gifts bestowed by Valley, she described her and her girl classmates meeting with Pat Ovary during her 5th grade year to understand their differences and to recognize how important they were to one another. Many years later, Pat contacted her and told her that she had been an “important part in shifting the energy in the room that day” and wondered if she might come back to talk with a 4th grade girl cohort that was experiencing some similar difficulties.
One of the most unique strengths of The Valley School, Petra mused, is in its commitment to developing socially responsible kids. “This is a huge part of my personality; I don’t stand for any unfairness,” a stance that Petra attributes, in part, to the culture in which she was raised and educated at Valley
Petra’s Educational Path
After leaving Valley, Petra joined The Northwest School in 6th grade; she graduated high school in 2003.  She believes that the seeds planted at Valley (valuing fairness and learning “in and out of the box”) continued to be sown at The Northwest School.  “Valley teachers were so invested in us and our learning in such a small environment….Because of this my early education was much more challenging and stimulating, even, than that at a university-level,” she said. So at Western Washington she continued to work “in and out of the box” by designing her own field of studies in business, English, and Psychology.
Petra’s Career Path
As she reflects on her career trajectory she is reminded that every class she took at the university was her choice; this was very much in line, she felt, with the Valley philosophy of “letting kids gravitate to what they really are interested in and want to be doing.”
Her career path certainly reflects this philosophy. She graduated from WWU after just three years and started working for lululemon (which, at the time was a startup) immediately out of college. She became the third store manager in the US and continued to work her way up in the company following her interests in working with personalities on a team (psychology), developing brand and writing copy (English), and helping to grow a business.
Several years after starting to work for lululemon she took a sabbatical and enrolled at Parsons School of Design in Paris where she studied the history of haute couture to feed and grow her interest in textiles and fashion. When she returned to Seattle she started her own styling company; and while she loved the creative work, she missed working with a team. She returned to lululemon to train and develop leaders.
She has now brought her diversity of strengths to Fitmob where she is excited to take advantage of the fast-paced growth and innovation inherent in a startup in order to learn and develop new skills like working with social media strategy. And she brings an important perspective to this new company of the importance of having a long-term vision. “There is a lot of power in the long-term,” she said.
Petra’s Vision and the Valley School Board
Petra also stresses the importance of holding a long-term vision in her position as Valley School board member. She jokes that she “inherited” her position from her mother who served on the board for twelve years. Upon stepping down from the Board, her mother and others recognized the importance of creating generational diversity in the Board. Petra was honored to accept her position in 2011.
For two years she served as secretary of the Board. And because of her background in leadership development, organizational development, and communication strategies, she sees her role as making sure that everyone is being heard. She feels excited about the different perspectives that members bring to the table and underscores the fact that each of them is there because of their love for the Valley School.
“Valley feels so healthy right now in terms of the support, the energy, the level of consideration everyone is bringing,” she said.  Excited about the future of the school, she sees the new building project as necessary to enhance the experience of the teachers and the students.  She remembers Valley when it was a one-building school and watched it grow (her father, in fact, worked on the first major building project –the “Big Room” -- as the campus grew).  She remarked, “A project like this feels monumental at the time but then we’ll look back and think, ‘how did we live without it?’”
Fundamentally, she sees wonderful strength in Valley’s community and leadership. The board members share in the vision that the Valley School should maintain a balance that honors the core values of the Valley School (i.e. what should never change and what makes Valley a unique place) and that recognizes that “what got us here won’t necessarily get us there.” In other words, she said, “We can both stand for who we are and innovate.”
Posted: 4/7/2015
Published April 7, 2015 Print